Other than the dragon, the fireworks display going off in her hand was the most impressive thing Britta had seen in New World. The level of details surrounding her, the accuracy of the blades of grass and brick walls, was all technically amazing, but it still looked like grass and walls. The multicoloured lights jumping from her open hand actually looked like something out of a fantasy story.

And it wasn’t even part of the game, it just told her she’d levelled up.

She closed her hand and the fireworks disappeared. Would Level 2 mean her abilities getting boosted? Probably not. These sorts of games tended to have small, incremental changes that added up over time. Becoming slightly better than terrible wouldn’t make the next fight any easier than this one.

She opened her status screen to see if anything was different, forcing herself to ignore the body at her feet.

Both her HP and MP had gone up a little. She had a whole extra point to add to her stats, which now had a + symbol next to each number. Did it really matter what she added it to? Probably not.

She already had high Int. Should she keep increasing it so she’d end up super-good at magic? That felt like a long-term goal. She needed something to help her now.

Her inclination was to make herself stronger. The good thing about a fantasy world was that you weren’t held back by the things you were in the real world. Being a girl, being small, not having friends, none of these things made you any less capable. In a computer chip, everything came down to numbers.

If she had Str 10, then she’d be as strong as anyone else with the same level of strength, and she could pump as many points as she wanted into that stat regardless of her size or gender.

It was ridiculous, of course. A three-foot gnome shouldn’t be able to knock out a giant with a single punch, but if she focused all her points into Str, she probably could. Now she regretted not choosing a fighting class. It would have been hilarious going around picking on all the big, macho barbarians and knights.

She added the point to Str, pushing it up to 6. The difference would be slight, but perhaps it wouldn’t be quite so difficult to stab someone next time. Britta looked at the corpse lying next to her and a shiver went through her. Only a game, only a game, she repeated to herself.

There was also a message saying ‘New Spell’ near the bottom of the screen. She pressed it and it took her to a new page.

Ventriloquism enabled her to make sounds. Useful for distracting or tricking people, she supposed.

Magic Wall was literally a wall. You could hide behind it, but it wouldn’t stop things passing through so you couldn’t use it like a shield.

The last one caught her attention, though. Fireball seemed like the sort of spell proper wizards would use. Getting it at level 2 seemed to good to be true. Which it was.

She was an illusionist, and this fireball wasn’t real. It just looked like a fireball. If the target believed it was real, then they would take the damage as though they had been hit by an actual ball of fire, but at her low level, their chance to know it was fake was very high. And if the target was an inanimate object like building, there’d be no effect.

It probably wouldn’t be very useful, but she still felt like it was better than the other two, which weren’t very useful either. She chose it. 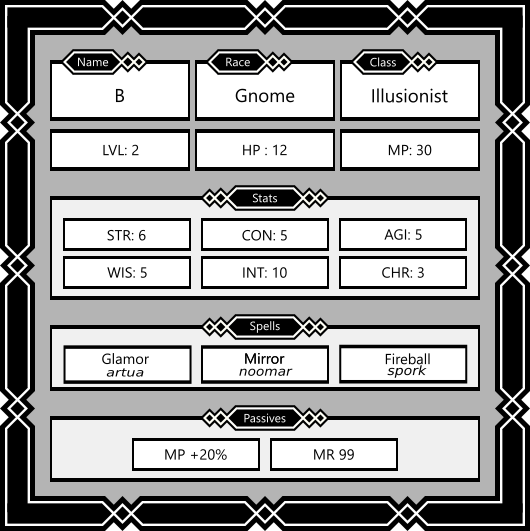 Spork? What kind of magic word was that? She really had to redefine all her spell casting triggers.

Britta closed the status screen and was faced with the corpse. It still hadn’t disappeared like any decent pixelated monster was supposed to, leaving behind loot. She had his dagger, which was like a sword in her tiny hands. She didn’t really fancy going through his pockets but he might have something useful on him. Money, for a start.

She gritted her teeth and kneeled down and quickly checked in the pockets of his trousers. It felt horrible squeezing her hands inside them.

She could only make a cursory search before it became too much for her to bear and she jumped back, breathing hard. She’d found nothing.

Was she supposed to leave the body here? If it was discovered, she might get in trouble. But that didn’t seem right. He was a criminal and she'd only defended herself, even though, technically, she’d stabbed him in the back.

It suddenly occurred to her that if he was a criminal, then perhaps his picture was up on the wall in the guild along with all the others. Which meant there might be a bounty on him, one Britta could collect.

But how would she prove it? She certainly couldn’t carry the body. And even if she could, it would be kind of awkward if he wasn’t up on the wall and she was dragging in a random guy she’d killed.

“Hey! You there, what are you doing?”

The shout came from the end of the alley. There were three figures standing there.

“Who’s that on the ground?”

“She killed him. Grab her.”

Britta’s grip tightened on the dagger. There was no way she could beat three of them. And if she died, she’d lose everything again. Of course, she did have a fake fireball now.