“The Coward. Use Invisibility to hide from your enemies,” repeated the Great Gnome, “and avoid detection. The spell can be cast once a day but more often and over a wider area as expertise is gained. A high wisdom score is advantageous.”

The spells favoured agility, intelligence or wisdom.  She didn’t know exactly what benefits those attributes would give, but none of them gained from extra strength, which was what she had been stacking. Britta let out a sigh. She would have been more upset, but she had the feeling if she’d stacked points in something else, that would have been the one to be of no use. She just had to accept that was the way things always turned out.

“Any of them will serve you well,” said the Great Gnome. “The question is how do you want to go forward from this point.”

Of the three, she was drawn most to Coward for obvious reasons. She didn’t care about the name. If anything, it convinced her it must be the strongest if the devs were that keen to put people off taking it. Puppet Master did have its own appeal, though. Assuming you could control people or monsters who were stronger than you.

There was a good chance you couldn’t. It would be ridiculously powerful if you could take control of the strongest person in a battle. But then, you could only use it once a day.

It was clear, though, that there were a lot of details about the spells she didn’t know.

“What I’d like,” said Britta, “is to have a better understanding of what each spell does.”

The Great Gnome shrugged. “It should be available to you. Perhaps if you meditated.”

Perhaps if she searched him for a data drive of some kind where he kept all his information.

She was letting her feelings show on her face again.

“This is stupid. I should be able to see what I’m picking before I have to pick it. I can’t believe they messed up something so basic.”

She could actually easily believe it, but she enjoyed saying it out loud for her observers to hear. She checked her status screen. 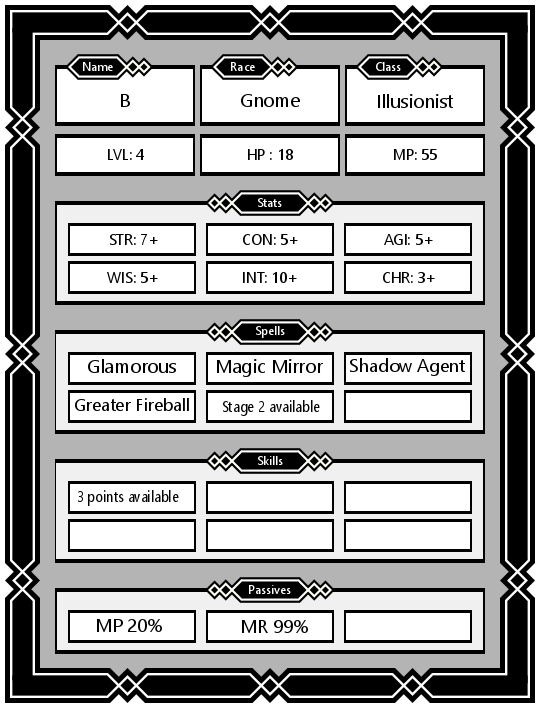 There was a lot of stuff to sort out. She had points to put into skills, whatever they were.

She had an extra point to add to her stats, but where to add it would depend on which Stage 2 spell she chose.

Her hit points had gone from fifteen to eighteen.

Mana had gone up to fifty-five, which was a huge jump. It was forty before. She currently only had fifteen left which meant her mana would have run out if she hadn’t levelled up. Another good reason for not using her spells in the challenge. It also reminded her that her shade was still out there following the mayor.

She checked the spells on her screen. They’d all been upgraded, including the Shadow Guardian, which was now Shadow Agent. She wondered what the difference was. When she placed her hand over the tab, a window opened.

<Shadow Agent: 20 MP to cast and 2 MP per minute to remain summoned>

The cost had doubled. It didn’t tell her what new things the shade could do now, though. It had, however, lost the odd symbols Shadow Guardian used to have next to it. Did that mean her shade would no longer act weird? She’d have to wait to see.

She placed her hand over the other spells.

She wasn’t sure what that meant. A light that would distract people instead of blind them? Was that a permanent change, or could she still use the older version? She would have tried it out, but she didn’t have the MP to play with.

Again, it wasn’t clear what ‘complete control’ meant. Would she be able to make a copy of herself and then get it to follow orders?

She couldn’t remember how much damage it did before. Had she even checked? She knew if the target made a successful saving throw, the damage would be zero, but cutting their chances in half seemed like a decent boost. She might even try using the spell next time she got in a fight.

Strangely, there was no information on how much MP it would take to cast. Shadow Agent only told her the MP cost, and the other spells told her everything but that. Perhaps it was time to call in her shade. Maybe it would know which sub-class she should pick.

There was a shimmer in the air and the shade appeared with numerous arrows sticking out of its body.

“Stealth mode compromised,” it whispered in its scratchy voice. And then it faded away.