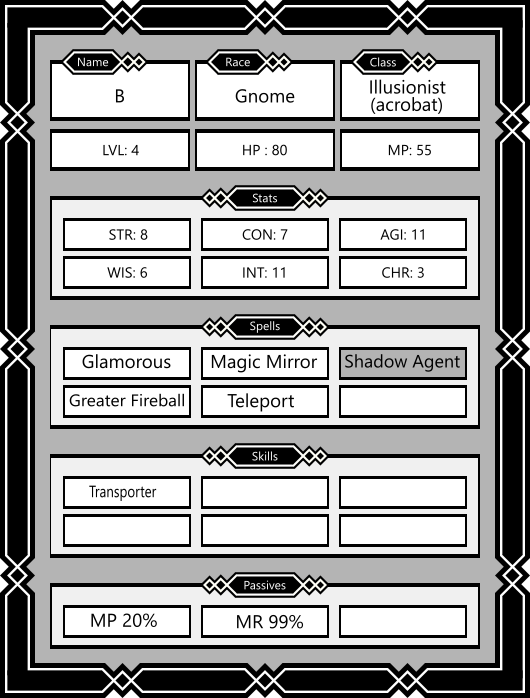 Britta looked over her status screen. There was a strange pleasure from just reading the numbers. They still weren’t as impressive as Dad’s, but compared to what they’d been, the improvement was marked.

Tougher, faster, with more spells and passives. It was getting to the point she wouldn’t be embarrassed to tell people she was an illusionist. Well, she still wouldn’t want them to know, but not for that reason.

The only thing that rankled was the Shadow Agent spell, which was greyed out. She tried casting it anyway. Nothing happened.

She had tried every day since the spell had been upgraded, but the shade refused to materialise. She’d already reported it to Dr Reedy, but they hadn’t been able to work out why it wasn’t working. It was most likely a bug and Dr Reedy had promised to find a fix as soon as possible. Britta wasn’t holding her breath. It would be hard to fix it when they didn’t have the faintest idea what was wrong.

Britta’s own suspicion was that the shade was deliberately staying out of reach. Like it was hiding. It was annoying the shade hadn’t reported its findings on the Mayor before going into hibernation, but there wasn’t much she could do about it except for wait, and hope it would eventually come back.

In the meantime, she would keep getting stronger.

Levelling up was the key to getting her character into a fit condition. She felt capable of taking on any opponent and having a fair chance of winning. Any low-level opponent, that is.

What she needed to do was find more ways of earning XP. She could kill things, of course, and she probably would have to, but there had to be other ways she could get to the next level. She needed 2500 XP to get from Level 4 to Level 5, of which she currently had 150. Killing a goblin was worth 100 XP. That was a lot of hacking and slashing, with very realistic blood. She’d much rather accept a quest to find a lost cat, a hundred times.

She was in the Temple of Roha, sitting on the stone slab where she’d spawned, taking her time as she checked the screen. It was Thursday and she’d given herself another hour to get herself prepared. Tomorrow, she planned to visit the Mayor and get back into the main storyline. She would have the whole weekend to find out what had really happened to Freddy. Until then, she had time to get herself ready.

She was supposed to be meeting the Mayor for dinner. Kind of a date. She wondered if she was expected to dress up. She couldn’t, since she had no other clothes, but it would be nice to have some fancy gear like Stan’s outfit when they’d visited Freddy’s aunt.

At least she had a new robe. She didn’t look like a hobo anymore. Although, looking like a mage might not be to her benefit, either. It would put people on their guard and, even worse, give them reason to think she was going to do something impressive. Magic had not been very reliable, so far. She had no doubt if she was put under pressure to perform, it would fail altogether.

There were a number of things she wanted to do before seeing the Mayor, though. The first being to talk to Dennis at the post office and find out what kind of relationship he had with the most powerful man in town. There had to be a story there. Hopefully, not an incomplete one.

Britta jumped off the slab and went into the chapel. Sister Florence was on her knees like she had been the last dozen times. Was she stuck in some kind of loop? She never seemed to be doing anything else.

“Yes, dear, how can I be helping you?” She looked up at Britta with a broad smile.

“Do you know where I could find some needle and thread? I need to make some adjustments to my clothing.”

“Oh, you need to make repairs?”

“I see.” Sister Florence got to her feet. “Come with me.”

This was new. Usually, Sister Florence marked things on the map and then stared off into space. Had Britta finally managed to break into the nun’s real personality?

She was taken through the chapel to a door behind the altar. Sister Florence opened it and waited for Britta to go through. There was a small room with a spinning wheel in it. One wall was covered by small cubicles, filled with various tools and items. Needles, thread, pins, scissors, measuring tape, bits of leather, swatches of cloth in different colours.

“You should find everything you need here.” Sister Florence closed the door and left Britta on her own. She walked around the room, checking what was there.

Britta knew how to sew. Small repairs or adding a lining wasn’t very difficult. Letting things out or taking them in. Making embellishments to a hem.

How would it work here? Could she do things that she wouldn’t be able to in the real world? She had always wanted to make her own clothes. She’d dreamed about being a fashion designer and having her own collection, but who hadn’t? It had never got further than that. It was time-consuming and it hurt your fingers.

Well, she had time and her gnome fingers were like treated leather. She took off her robe and set to work.

Once she got into a groove, she seemed to lose track of time. She had given herself an hour, two flew past. It was relaxing, and very satisfying to see the changes take place in just the way she envisioned them. That had to be a game enhancement. A message had popped up twice to tell her ‘sewing’ had been upgraded, although it hadn’t said what that meant.

The results, though, spoke for themselves. Her robe now had leather strips on the skirt, patches on the elbows and shoulders, and straps wound around the sleeves. She’d added pockets all over the place.

It had a utilitarian feel to it now. Less like a magician’s costume and more like an adventuring outfit. She could be a rogue or a thief, or even a fighter who prioritised movement over armament.

The robe’s stats hadn’t changed, and she could no longer change the colour and size, but that was okay. It looked just how she wanted it.

She put it on.

The message popped up in front of her. One less goblin she’d need to kill. Not bad.