Britta’s nose throbbed. It was large enough that she could see the end of it had turned red from banging into the invisible wall.

“How do I get out of here?” she asked the dragon.

The dragon stared over her head and did its best impression of a museum exhibit, although it would’ve been a very popular museum with that thing in it.

“Players aren’t allowed to leave this area until they have completed the tutorial,” repeated the dragon. The problem with computer generated characters was that no matter how realistic they looked, they were still just a bunch of prepared dialogue. You couldn’t have a real conversation with them and you couldn’t expect them to respond like a person would. They were just following programmed routines.

“I mean how do I exit the game.” Unlike her red nose, her impatience did not need to be manufactured by a computer. It came a hundred percent from her.

The dragon shifted its gaze to peer down its long snout at her. “Open your status screen.”

“You know, this would all be a lot simpler if you did the tutorial.”

Britta narrowed her eyes and stared up at the dragon. It had almost sounded like a real person talking.

“What’s your name?” she asked.

What kind of name was Nigel the Dragon?

“Shouldn’t you be called Draknar the Dreadful or something equally ridiculous? And why do you have an English accent?”

Now the dragon sounded like it knew it wasn’t real.

“Do you know you’re in a game?” she asked, watching closely in case the dragon gave away something, although she had no idea what that could possibly be.

“Only in here. The tutorial isn’t really part of New World. And I don’t really meet many people out there. I’m an endgame boss and no one’s levelled up high enough to meet me so far. It’s quite boring, really.”

There was no way this was a computer AI talking to her. It sounded like there was a person talking into a microphone somewhere and his voice was using the dragon as a conduit. It wouldn’t be very difficult to set up, but would they really give a person a job like that? It didn’t really make sense.

“Well, Nigel, I’d like to have a look around without doing the tutorial. I don’t have a lot of time and I just want to see what the world looks like. I’m not really interested in running around pretending I’m a magical nerd.”

“Oh,” said Nigel, “you don’t want to be a hero?” Nigel raised the part over one eye that would have been an eyebrow if he’d had any. “Doesn’t everyone want to play the hero?”

“No,” said Britta. “Only children and disappointed forty-year-old men.”

“Potato, po-tah-to,” said Britta. “So, this tutorial, how long will it take?”

“Jesus Christ, Nigel the Pedantic Dragon. Roughly how long if I do it as fast as possible?”

“Ten minutes. You don’t have many friends, do you B?”

“That’s what you put as your name during character creation, the letter B. I don’t know what it stands for, but I could take a guess.” The dragon curled his upper lip.

“Can you nix the snippy attitude, Nigel. I didn’t come here to get sneered at by a fat lizard.”

Nigel lowered his long neck so his head swung down in front of Britta. He snorted, firing off steam from the large nostrils. “I am a dragon, you know? I could eat you.”

Britta took a step back. Even though she knew it wasn’t real, it was still hard to not react to giant teeth lunging towards you. She wanted to take another step back but forced herself to stay where she was. “In the tutorial? There’s no way that’s allowed.” At least she hoped not.

The dragon raised his head back up. “No, it isn’t, sadly. But if we meet out there, you better bring a magic sword. A big one.”

Nigel tilted his head and peered at her with a yellow and red eye. “Oh, yes. You’re a magic user. Well, maybe a wand. The size doesn’t matter. There is supposed to be a wand in the game somewhere that can actually defeat me. I won’t tell you where it is—no spoilers.”

This was a very odd dragon. “Are you like this with all the players?”

“No,” said Nigel. “Most players do the tutorial.”

Nigel took a deep breath and shook his head. Britta thought she saw some eye rolling, too, but it was too far away to be sure.

“Open your status screen by placing your palms together and pulling them apart.”

Britta did as instructed. A semi-transparent screen appeared between her hands. 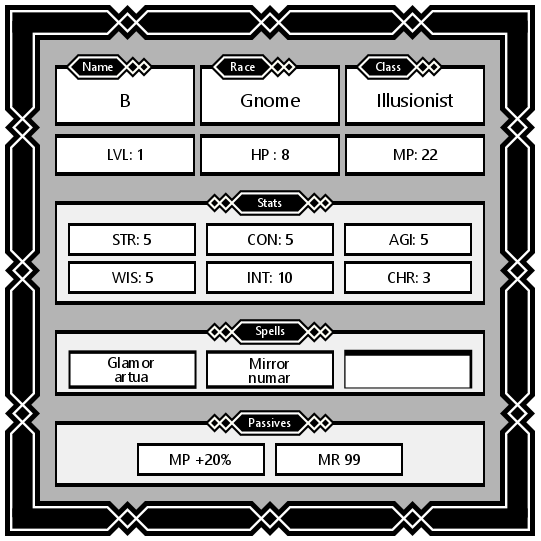